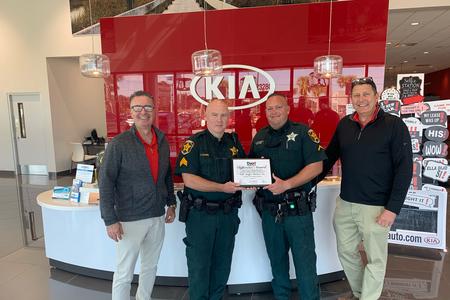 In 2006, Polk County Sheriff’s Deputy Matt Williams and K-9 Office DiOGi were murdered during a routine traffic stop. The outpouring of emotional and financial support for Williams’ family following the event inspired the creation of Polk County Sheriff’s Charities, Inc., a nonprofit organization which provides support for members of the Polk County Sheriff’s Department who are facing significant, unexpected tragic events in their lives, including Sgt. Ronnie Brown’s family, who needed help and support after Brown’s untimely death as a result of injuries he received in an altercation with a Polk County jail inmate, and the family of Sgt. Wes Whitmore, who was hit and killed by a motor vehicle while making a traffic stop.

In addition to assisting the family of officers and Polk County Sheriff’s personnel experiencing unexpected tragedy, the charity has supported needs that the law enforcement community has identified, such as purchasing Christmas gifts for children in Polk County’s most economically challenged neighborhoods, supporting organizations dedicated to assisting victims of domestic violence, as well as supporting the agency's K-9 unit for replacement of their beloved K-9 partners. To help support this organization and its February Jeepin’ with Sheriff Judd event slated for February 26 – 28th at Clear Springs Ranch, members of the Dyer Difference Award Committee chose to recognize the Polk County Sheriff’s Charities, Inc., with the January Dyer Difference Award and $3,000 check.